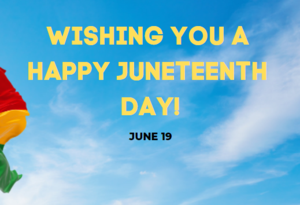 Juneteenth celebrates the end of slavery in the United States.


Juneteenth celebrates the end of slavery in the United States. It is also known as Emancipation Day, Freedom Day, Jubilee Day, Juneteenth Independence Day, and Black Independence Day. On June 19, 1865, Major General Gordon Granger arrived in Galveston, TX, and announced the end of the civil war and the end of slavery. Although the Emancipation Proclamation came 2½ years earlier on January 1, 1863, many enslavers continued to hold enslaved Black people captive after the announcement, and Juneteenth became a symbolic date representing African-American freedom. Juneteenth became a federal holiday on June 17, 2021. All 50 states and the District of Columbia recognize Juneteenth as a holiday or observance, and at least 18 states have enacted laws to observe the holiday as a paid state holiday.